skip to main | skip to sidebar

Mikhail Vrubel: The Head of the Demon 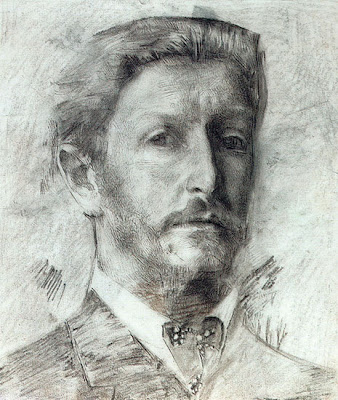 Mikhail Vrubel is generally considered the greatest of the Russian Symbolist painters. The departure from realistic naturalism in russian painting that had begun with Mikhail Nesterov's enigmatic painting The Visitation realized it's full expression in the work of Vrubel. His unique style and great talent are evident in this fantastic self portrait in pencil from 1904-1905.

In 1890, Vrubel painted a series of black and white watercolour illustrations for Mikhail Lermontov's romantic poem The Demon. Later that year Vrubel exhibited a large oil painting called The Seated Demon in Moscow. The painting caused a great deal of controversy. At first the work was condemned by conservative critics. Some even called it ugly. But later art patron Savva Mamontov praised Vrubel's genius and commissioned him do some paintings for his private opera house. The scandal made Vrubel famous.

I have posted The Seated Demon and the watercolour illustrations here with some excerpts from Mikhail Lermontov's The Demon. 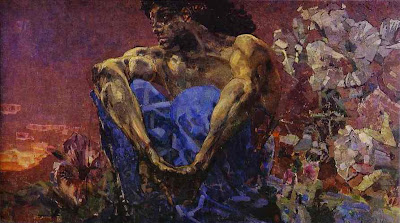 His way above the sinful earth
The melancholy Demon winged
And memories of happier days
About his exiled spirit thronged;
Of days when in the halls of light
He shone among the angels bright;
When comets in their headlong flight
Would joy to pay respect to him
As, chaste among the cherubim,
Among th' eternal nebulae
With eager mind and quick surmise
He'd trace their caravanserai
Through the far spaces of the skies;
When he had known both faith and love,
The happy firstling of creation!
When neither doubt nor dark damnation
Had whelmed him with the bitterness
Of fruitless exile year by year,
And when so much, so much...but this
Was more than memory could bear. 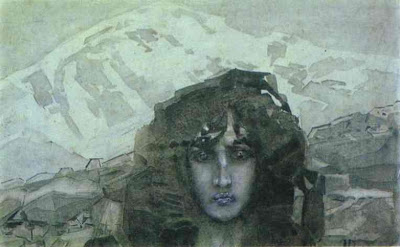 Outcast long since, he wandered lone,
Having no place to call his own,
Through the dull desert of the world
While age on age about him swirled,
Minute on minute - all the same.
Prince of this world - which he held cheap -
He scattered tares among the wheat....
A joyless task without remission,
Void of excitement, opposition -
Evil itself to him seemed tame. 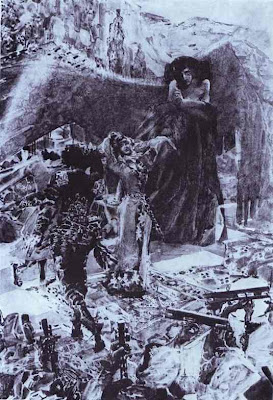 So by the midnight star I swear
By blazing East and beaming West
No Shah of Persia knew her peer
No King on earth was ever blessed
To kiss an eye so full and fine.
The harem's sparkling fountain never
Showered such a form with dewy pearls!
Nor had mortal fingers ever
Caressed a forehead so divine
To loose such splendid curls;
Indeed, since Eve was first undone
And man from Eden forth must fare
No beauty such as this, I swear,
Had bloomed beneath the Southern sun.

The Demon did see.... For one second
It seemed to him that heaven beckoned
To make his arid soul resound
With glorious, grace-bestowing sound -
And once again his thought embraced
The sacrosanct significance
Of Goodness, Beauty and of Love!
And, strangely moved, his memory traced
The joys that he had known above
A chain of long magnificence
Before him link on link unfolding
As though he watched the headlong flight
Of star on star shoot through the night.... 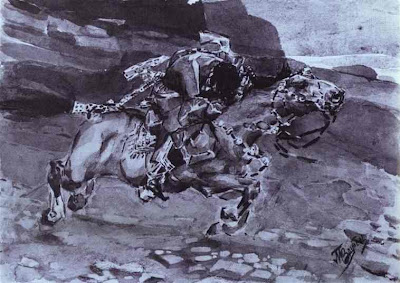 Swift as a stag still runs the horse
Snorting as though he held his course
In some fierce charge, now plunging on
Now pulling up as though to harken
His nostrils flared to sniff the wind:
Then leaps up and comes ringing down
On all four hooves, sets sparking
The stones and, in his mad career,
His tangled mane streams out behind.
A silent rider he does bear
Who lurches forward now and then
To rest his head in that wild mane.
The reins lie slack in useless hands,
The feet are deep-thrust in the stirrups,
And on his saddle-cloth the bands
Of blood are broadening as they gallop
Ah gallant steed, your wounded master
You bore from battle swift as light
The ill-starred bullet sped yet faster
And overtook him in the night! 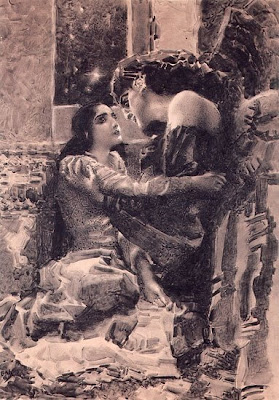 I am he to whom you barkened
In the stillness of the night,
He whose thought your mind has darkened,
He whose sadness you have felt,
Whose image haunts your waking sight,
Whose name the end of hope has spelt
To every soul with whom I treat.
I am he no man may love,
A scourge to all my mortal slaves,
The ill in nature. Enemy
To Heaven and all the powers above.
Lord of knowledge, liberty.
And, as you see, I'm at your feet.
Moved beyond all that I have known
I would speak softly in your ears
Quiet prayers of love. Tell of my pain,
My first on earth, and my first tears.
Ah hear me out, for pity's sake!
One word from you would quite restore me.
Robed in the love of your pure heart
I might again resume my part
In the angelic ranks and take
An aspect new and a new glory.
Ah, hear me, hear me I implore you,
I am your slave and I adore you!
No sooner did I see you than
I felt a sudden, veiled revulsion
For immortality and power;
And I was drawn by strange compulsion
To envy the frail joys of man;
Life without you became a torment
To be apart from you - a horror.
A living ray of warmth, a portent
Of fair renewal touched my heart
And set the cold blood coursing. Sorrow
Beneath the scar stirred like a serpent
Awakening an ancient pain.
For, tell me, without you what gain
Is there in my infinity?
Endless dominion, majesty?
Loud, empty words - a spacious fane
Devoid of all divinity! 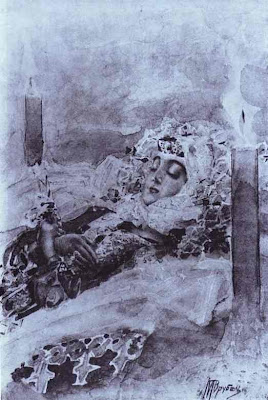 My life is wondrous full and new,
The crown of thorns I proudly cast
With my own hands from off my brow.
All that I have been shattered lies:
My heaven and hell are in your eyes.
I love you with a passion vast.
You cannot love as I love you,
With all the ecstasy and power
Of deathless thought and dreams sublime.
Since the beginning of all time
Your image on the eternal air
Has gone before me - till this hour.
My soul has long been troubled by
The sweet sounds of the name you bear;
And in my days of blessedness
You were my only lack.

And most gently he
Did touch his burning lips to hers;
Full of seduction were the words
In which he soothed her soft repining;
His mighty gaze held fast her eyes
And burnt her.- In the cloistered shade
He glinted poised above her, shining.
Inevitable as a blade.
The evil spirit overcomes her.
His kiss, like deadly poison, numbs her
And stills the heart within her breast.
One terrified and anguished cry
Aroused the silent night from rest.
It was a last, a desperate plea
Yet full of love, live agony,
Hopeless farewell, finality...
To her young life a last good-bye. 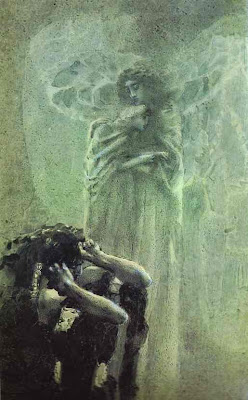 Circled by the strong arms which bore her,
Tamara's sinful soul shrank close
To the protecting angel's side
Seeking in prayer her fear to hide.
Now, once again, he stood before her
But - Heavens! Who would know him now?
His gaze so brooding and morose
So venomous with hate eternal...
It seemed a death-like cold infernal
Lay on that frozen face and brow.
"Spirit of darkness, get thee gone!"
Heaven's messenger then made reply:
"The victory has been yours for long
Enough, and now the end is nigh.
Just is the judgement of the Lord!
The days of trial are over, past:
With the frail flesh, know. she has cast
Off all the claims of evil too!
For long now we have waited for her:
Her soul was of those very few
Who at the price of martyr's pain
Endured one moment long attain
To tasting joy beyond compare.
The Maker spun its living thread
Out of the finest, purest air
Not for the dull world was she made
No more that it was made for her.
She has redeemed at cruel price
Her wavering faith in powers above.
She suffered, loved, laid down her life -
And Heaven opened to her love!"

The angel bent his gaze severe
Upon the Tempter, eye to eye,
Then joyful soared ... to disappear
Into the boundless, shining sky.
The Demon watched the heating wings
Fading triumphantly from sight
And cursed his dreams of better things,
Doomed to defeat, venting his spite
And arrogance in that great curse....
Alone in all the universe,
Abandoned, without love or hope!...

Like Lermontov's Demon, Vrubel had his Tamara as well. In 1896, he fell in love with the famous opera singer Nadezhda Zabela and they were married. She sang the parts of the Snowbird, the Swan Princess, and the Princess Volkhova in Rimsky-Korsakov's opera's. Vrubel designed stage sets and beautiful costumes for her. She was his fairy tale princess. He painted this beautiful portrait of her as the Swan Princess during this happy period. 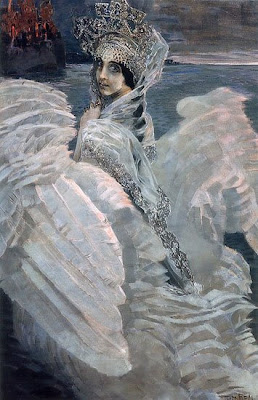 Sadly, Vrubel's fate would be as tragic as that of Lermontov's Demon. In 1901, he suffered a nervous breakdown at an exhibition of the painting Demon Downcast, and was taken to a mental clinic where he was hospitalized. His mental illness was caused in part by syphilis. Eventually he became completely blind due to the disease.

Vrubel continued to create some of his greatest work for a few years, until his vision loss and mental illness became too severe. This incredible painting called The Perl is one of his later works. 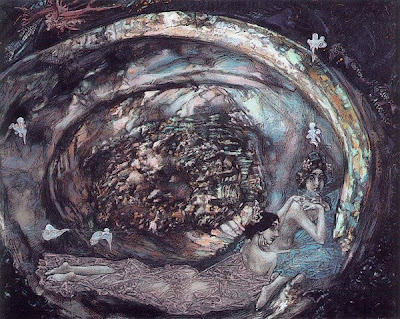 From the same period, this simple still life of a fresh cut rose in a glass of water is a wonderful example of the genius of Vrubel's unique technique and style. 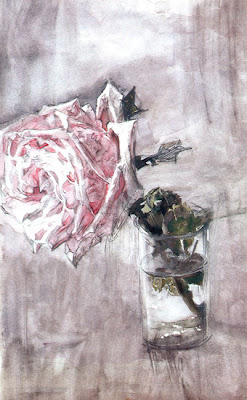 This is another portrait of Nadezhda Zebela-Vrubel from this later period. 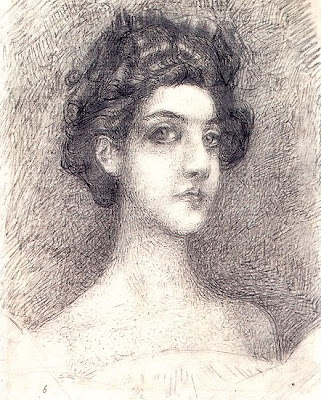 This unfinished portrait of the poet and novelist Valery Briusov, a close friend of Vrubel's, is the last large work he attempted before he gave up painting in 1906 due to his increasing loss of vision and mental illness. He died four years later. 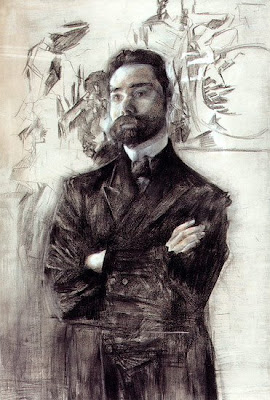 Read the entire text of Mikhail Lermontov's The Demon at www.friends-partners.org.
Posted by David X at 3:34 PM

They both are genial. I adore!

thanks for this great post about Vrubel. Loved the poem.